Posted on August 1, 2014 by medievalfragments

In last week’s blogpost, Irene O’Daly explored the world of portable books — manuscripts that are small enough (and light enough) to be carried around by the user. In today’s post we shift our attention to the opposite end of the ‘size-spectrum’ and examine some of the largest manuscripts ever produced in the Middle Ages. 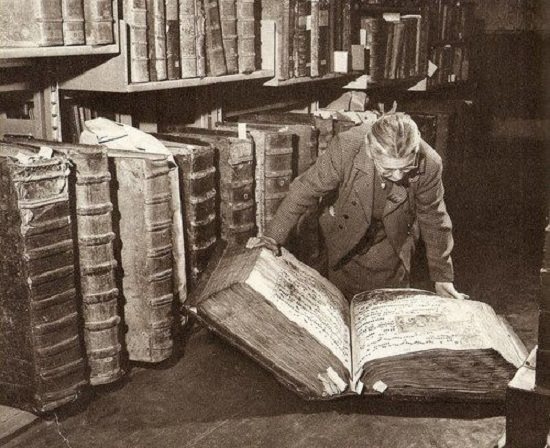 While most medieval manuscripts are of a size that could be easily picked up and carried, there are some books that are so large and so heavy that it would take two (or more) people to move them.

Among these are volumes known as ‘Giant Bibles’. These books typically contain a complete collection of the Old and New Testaments and present huge dimensions. One particularly famous large-format Bible is an early thirteenth-century pandect known as the Codex Gigas, which measures (a whopping) 890 x 490 mm and weighs over 165 pounds. In addition to the Old and New Testament, the Codex Gigas also contains two texts by Flavius Josephus, Isidore of Seville’s Etymologiae, and a collection of medical treatises. 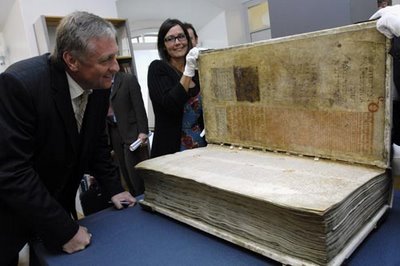 The manuscript is also commonly referred to as the ‘Devil’s Bible’ because of a large full-page miniature of the Devil on fol. 290r, as well as a myth surrounding the book’s creation.

It is said that a monk named ‘Herman the Recluse’, broke his vows and was sentenced to be buried alive in the walls of the monastery. His sentence would be commuted, however, if he could copy a book containing all human and divine knowledge in a single night.

Despite Herman’s best efforts, around midnight he realized he could not complete the task, and was forced to call in a favour from the Devil, who finished the manuscript in exchange for the monk’s soul. The miniature was painted in homage to the Devil.

(A digital copy of the entire manuscript is available here.)

Facsimile of the Codex Gigas

It was not just Christian Bibles that were made in large-format in the Middle Ages, however. There are also some late-medieval copies of the Qur’an that feature similarly impressive dimensions, such as this 500-year old manuscript, currently held at the John Rylands Library at Manchester University:

Because the manuscript has been deemed too fragile to be put on display, the John Rylands Library has opted to photograph the book and make it available for study via their digital collections. (More about this digitization project can be found here.)

But why, exactly, were these books made so large?

There are a number of potential explanations on offer. In the first place, size tends to reflect importance. Because large-format manuscripts often contain the Word of God, it is very possible that some bookmakers wished to reflect the importance of the text with a suitably impressive material format. Alternatively (or perhaps additionally), some have suggested that these books were meant to reflect the power and prestige of the donors who paid for their commission — a wealthy bishop or nobleman perhaps, who wished to memorialize his name in the production of a massive and showy pandect. Others have provided more pragmatic reasoning, suggesting that these books were designed big in order to rest on a lectern for public reading — their large size making it easier for readers in a church to see the page.

Indeed, the collective reading of large-format books stationed on lecterns has been recorded in a number of medieval illuminations and paintings, such as the image below (though these singers look like they might be engaging in a pub sing-a-long, rather than performing the psalms…): 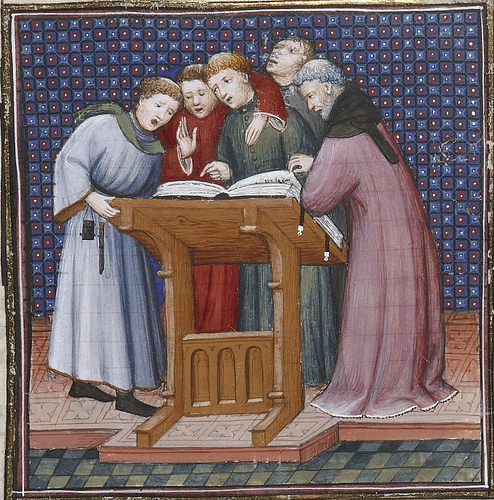 In most cases, it is likely a combination of these factors that motivated some bookmakers to create gigantic manuscript volumes.

The tradition of making large-format books did not stop in the Middle Ages, but continued straight through to the Renaissance, as scribes and printers opted to make even bigger, and more impressive copies than before. In the following image we see Glenn Holtzman at the Henry Charles Lea Library at the University of Pennsylvania with an absolutely gigantic choir manuscript from the Renaissance: 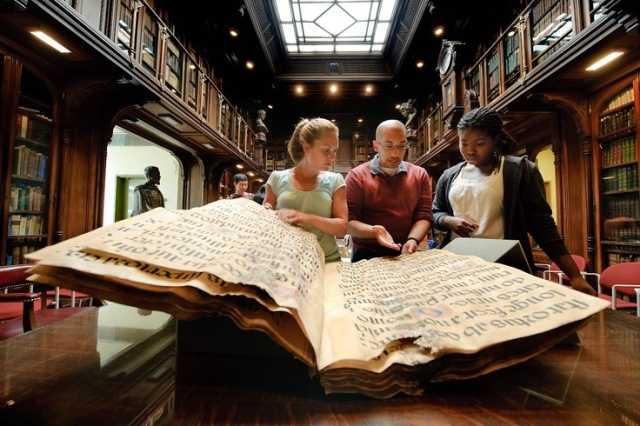 The fascination with giant books continues today, and some particularly ambitious artisans have taken up the challenge to push the boundaries of book production to epic proportions. I leave you with this family project in Hungary, which has succeeded in creating, quite possibly, the largest book ever made. (How many souls were needed to complete this volume, I wonder?)

Largest Book in the World?

This entry was posted in Jenny Weston, Project News. Bookmark the permalink.