Fireworks, Baseball and the Dog Days of Medieval Summer

Posted on July 4, 2014 by medievalfragments

Since today is Independence Day in the States and many of my friends and family will be enjoying celebrations, today’s blog post takes a look at fireworks used as spectacle in the Middle Ages.

First invented in China during the early twelfth century, fireworks came to Western Europe by way of merchant trade routes. By the late fourteenth century, small pyrotechnic displays were being used to enhance Christian mystery plays, where the ‘whole Church was filled with sparks’. Over the next centuries, fireworks became a part of festivities at royal courts, religious dramas, and even summer markets.

‘On summer days, great wooden and papier-mache wheels covered in painted human and animal figures were raised up over the town square on ropes and filled with a variety of simple rockets…fireworks burst forth from the wheel…’ [1]

A popular firework display was the ‘fiery dragon’ that would move across the sky sending fireworks all around. Another popular type was a spinning wheel of sparks or girandola. We know of these early displays from a book about fireworks from 1594 by Friedrich Meyer. Also in this book we come across a spectacular drawing of ‘the spark of life’ theory popular in the sixteenth century. This image is connected to the idea that an essential part of fireworks corresponded to an essential part of human nature. 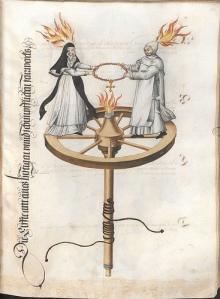 Perhaps during the summer, the medieval person came across the opportunity to see these displays of drama and performance.

Or perhaps they were enjoying summer games.

However, these festivites were generally over by August, when the Dog Days of Summer arrived. Usually from late July into mid-September when the rising of the dog star, Sirius, signaled the months with the hotest temperatures, and were believed to be unhealthy for many activities.

Although the first sparklers may have been made from goose quills, we all enjoy summer just the same.