Unfurling the Past: Ancient & Medieval Scrolls

Here at the Turning Over a New Leaf project, we tend to focus our attention on the medieval ‘codex’ — texts hand-written on parchment, folded and sewn into quires, then wrapped together in a binding. The codex, however, was not the only vehicle of the medieval text. Long before this format came into popular use in the first and second century AD, the ‘scroll’ was the preferred packaging for a written text. 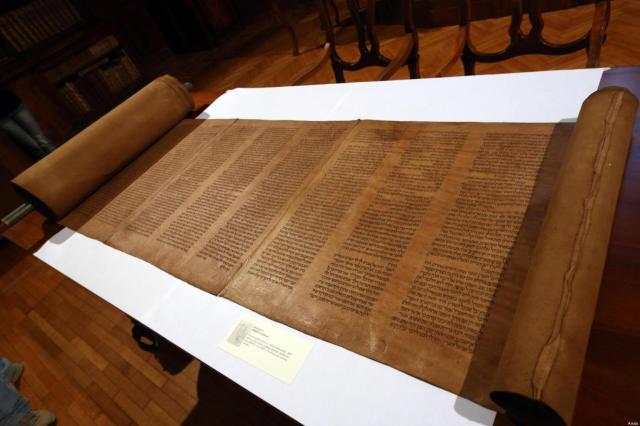 To make a scroll, one first needs to choose the material. Some of the oldest scrolls were made of papyrus, and despite the fragile nature of this material, there are many papyrus-scrolls that still survive.

For example, in the eighteenth century, 1,800 papyrus scrolls were discovered buried in volcanic mud in the ancient town of Herculaneum (located on the shores near Mt. Vesuvius). Despite being carbonized by the eruption in 79 AD, scholars still managed to unfold and read many of them. (You can read more about this endeavour here.) 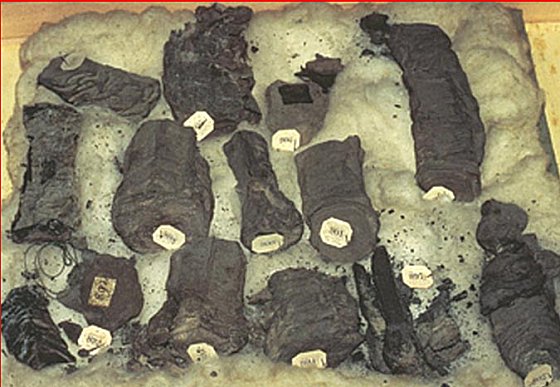 During the Middle Ages, parchment became the material of choice, which was then eventually replaced by paper in the early modern period.

As soon as the codex was invented in the first century AD, it threatened the survival of the scroll. The codex was more sturdy and it was easier to find passages of text  (flipping pages to find a chapter is a lot easier than unfurling a giant scroll). The birth of the codex did not mean the death of the scroll, however. Scrolls continued to be used in various contexts, and were particularly favoured by long-term record-keepers.

One of the biggest advantages of the scroll was the fact that pages could be easily added — all one needs to do is glue another sheet to the bottom! This logistical benefit was not lost on some medieval government agencies, such as the English Exchequer, which kept most of their financial records throughout the Middle Ages in scroll form, known today as Pipe Rolls.

It was not only the government that saw a benefit in using scrolls. The records of Wakefield Manor, one of England’s largest manorial houses, were kept up-to-date in a collection of scrolls from the years 1274 to 1925! 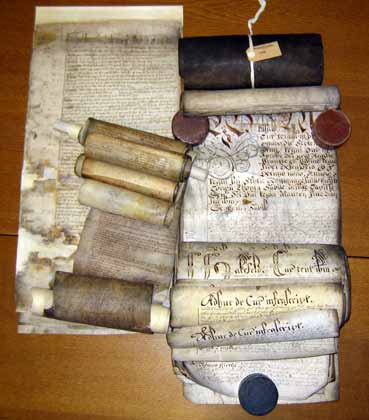 One of the most recognizable scrolls still used today is the Torah — a text comprised of the first five books of the Hebrew Bible, which is copied onto a scroll, and read out to Jewish communities at least once every three days. It is typically forbidden in Judaic custom to touch the Torah with bare hands, both in reverence to the Word of God and to avoid damaging the text on the page. To avoid touching the scroll, the Torah is commonly equipped with specialized wooden handles.

4. The Future of the Scroll is Bright!

While the codex may have reigned supreme for the last 2,000 years, the scroll has somehow managed to live on, kicking and fighting its way back into our daily reading habits. This continued relevance of the scroll is not only due to our collective return to ‘scroll-style’ reading on our laptops and smartphones, but it also owes itself to the creative enterprises of some contemporary authors, such as Jack Kerouac, who opted to type his best-selling novel, On the Road, on a 120-foot paper roll. (You might have to ‘scroll’ down to see it…)

Copy of Jack Keruoac’s book, On the Road