Reeling Back the Years: Commemorating the Middle Ages

Posted on May 9, 2014 by medievalfragments

As preparations for the World Cup gather momentum here in the Netherlands, it is worth remembering some of the other reasons why 2014 is an important year. Many commemorations across the world are marking the passing of 100 years since the outbreak of the First World War. But 2014 also commemorates two events of medieval significance, one which had European-wide implications, and one of, arguably, stronger national concern.

In 814 in the now German town of Aachen Charlemagne, the founder of the Carolingian Empire, sickened. According to the account of his biographer Einhard, Charlemagne took to bed with a high fever, and proceeded to fast from food hoping to drive the fever away. It was to no avail, however, and he died a week later, after taking Holy Communion on January 28. Einhard’s account of Charlemagne’s death and burial is rich in symbolism. He was buried in the cathedral he built, a monument to medieval architecture to this day, and his death was preceded by a number of omens and portents. Einhard recounts multiple eclipses in the years prior, the collapse of part of Charlemagne’s palace, the destruction by fire of a bridge over the Rhine at Mainz, and the appearance of black spots in the sun. The emperor’s passing was marked by a series of fitting and dramatic events.

The town of Aachen is marking 1200 years since Charlemagne’s death with the launch of a trio of exhibitions celebrating Charlemagne’s military and cultural achievements, which will include a display of a number of manuscripts. The period of Carolingian manuscript production kick-started by Charlemagne was unique as it united innovations in all aspects of book craft: the clarity of the text itself came under renewed study by scholars, while the script of these texts was simplified and standardised. In hand with these developments, the status of the book was celebrated by intricate decorations and bindings, some of which have survived to this day.

Jumping forward two hundred years… 2014 also marks the millennium of another important medieval event with strong relevance to Irish history, the Battle of Clontarf (23 April 1014). On the field at Clontarf, the forces of the High King of Ireland, Brian Boru, defeated an army of Vikings, lead in part from the Viking stronghold of Dublin. Although Brian Boru was victorious, he died in battle, and the fighting resulted in the death of thousands of men. Regardless, Brian Boru became an important symbolic figure in Irish history, the leader of the liberation of Ireland from foreign hands. The Battle of Clontarf is being commemorated this year by a re-enactment, and a series of events unfolding throughout the summer.

Unlike Einhard’s Vita Karoli Magni, which, despite some dramatic licence, is as close to an eyewitness biography from the Middle Ages that we can get, accounts of the Battle of Clontarf must be pieced together from a range of medieval sources, including annals, Icelandic sagas, and an epic poem written in the twelfth century entitled ‘Cogad Gáedel re Gallaib’ (The War of the Irish against the Foreigners). These sources present a version of the Battle that reads at times more like a scene from Game of Thrones, than a reflection of what actually happened. Mixing legend with fact, these sources often served a propagandist purpose, reinforcing the historic status of Brian Boru. 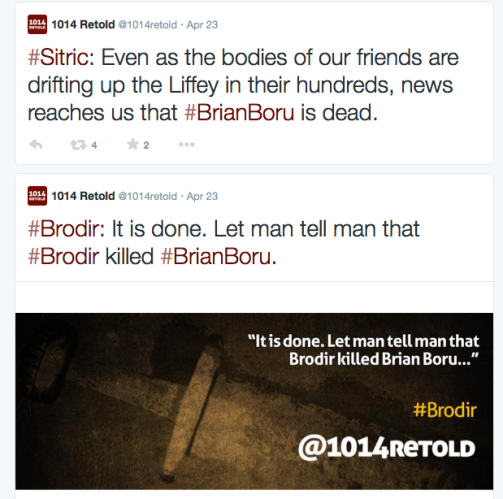 In each of these cases of commemoration, manuscripts serve as important touchstones. Manuscripts produced in Aachen, or connected with Charlemagne’s school, provide an insight into mechanics of book production in that period. Handled by scribes and scholars surrounding Charlemagne, they are, in a sense, among the most intimate relics of his reign. On the other hand, the sources related to the Battle of Clontarf pose a challenge familiar to medieval researchers: the task of reconstructing an event based on (often biased) accounts written over 100 years later. 2014 is not simply an occasion for commemoration, but prompts a new look at the sources that shaped our understanding of these events – an exciting prospect for medieval scholars worldwide.