The Beauty of the Injured Book

Posted on May 2, 2014 by medievalfragments

While our eyes are naturally drawn to pages filled with color and gold, those without decoration can be equally appealing. Indeed, even damaged goods – mutilated bindings, torn pages, parchment with cuts and holes – can be highly attractive, as I hope to show in this post. The visual power of damage may be generated by close-up photography, with camera and book at just the right angle, catching just the right amount of light. The following images celebrate the beauty of the injured book, the art of devastation.

This is what I call a Frankenstein page. It is composite in that the top part is from a different sheet, perhaps even from a different animal, than the lower half. The sheet used by the scribe was short on one side, but he still wanted to use it. In came the patch that is now the top half of the page. Where the two pieces of skin meet the scribe-surgeon punched holes through which he pulled a thin cord, joining them together. The operation was successful, the insert was not rejected, and so the page could be filled with text. Miraculously, the low-quality book was never thrown out. Instead, it limped, for centuries, to the finish line of our present day – to the safety of the Leiden University Library.

This poor-looking manuscript from the fifteenth century looks worn and beaten. It is so happy to be retired that you can almost hear a groan of disappointment when you take it out of its box. The manuscript is filled with school texts and it was heavily used over a long period of time. At some point the binding gave in and began to arch, like an old man with a painful back. It could do so because the book was fitted with a cheap, so-called “limp binding”. This type lacked the wooden boards of regular bindings – as well as the firm support these boards provided. Such bad backs are reflective of how popular the books once were.

This page needs a shave. From time to time you encounter a hole in the page, but this one is special. An important stage in the preparation of parchment was removing the hair from the skin. When the parchment-maker pushed too hard with his knife, a cut like this would appear. Not unlike a distracted hairdresser, the individual who prepared the parchment overlooked a few tiny – white – hairs, which still inhabit the hole. It makes for a pretty picture with the light from behind, which also highlights the text on the other side of the page. 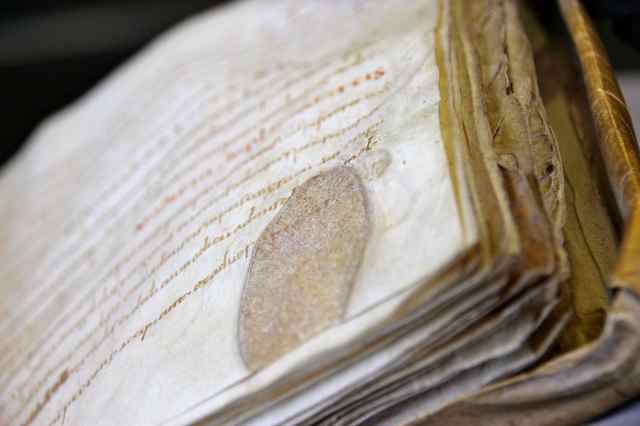 This parchment sheet came from an animal with skin problems. It appears that the cow had been in a fight and was kicked. As your butcher will tell you, such kicks result in scar tissue, which he will remove. Judging from how infrequent we encounter such patches in medieval books, we may assume that skin with such damage was not processed into parchment. However, this particular book was made from off-cuts: strips of bad parchment that were cut away and thrown out. Remarkably, someone fished them out of the bin and produced a book from it (more details can be found in this YouTube movie I made). Thus this “garbage manuscript” exposes an urge for cheap materials as well as a dispute between two medieval cows.

4. Touched by a human

Books are made for reading and thus for being handled by human hands. The margins facilitate an easy grip of the book without your fingers blocking the view on the text. However, if you hold a book with dirty hands, you may leave your mark behind as a reader. While such stains are often subtle, the person that handled this twelfth-century manuscript had inky fingers: he left a fingerprint behind. Judging from the colour – a shiny, deep kind of black – it concerns printing ink, which puts this manuscript in the hands of a printer. He did not bother to wash his hands. It was, after all, one of those old-fashioned handwritten manuscripts, which had been long overtaken by the modern and spiffy printed book. 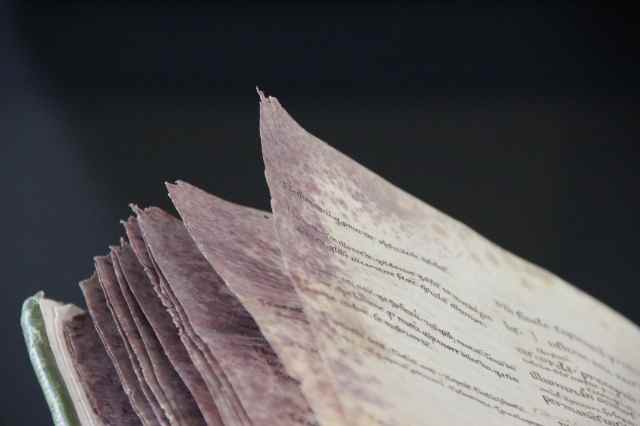 And so it happened that a certain medieval reader did not pay attention and placed his book in a moist environment. And so it happened that he forgot all about the book. That is the story behind the mould on the pages of this eleventh-century Psalter. The fungi turned purple over time, producing a neat contrast between the high quality white parchment sheets and their damaged corners. It’s the beautiful despair of a book under duress.