Posted on February 7, 2014 by medievalfragments

Today’s post is dedicated to lecterns and bookshelves — the essential furniture of the medieval book! Both of these items were regular companions of the book and they played an important role in supporting and protecting manuscripts while in use and in storage.

The lectern is one of the most recognizable features of the church, and like today, they were used by medieval readers to hold open their books during public readings. Many of them were beautifully carved or decorated to reflect the importance of the books they held.

Notice the two little wooden spindles at either side of this early 15th-century lectern, designed to hold long candles for reading in dark places: 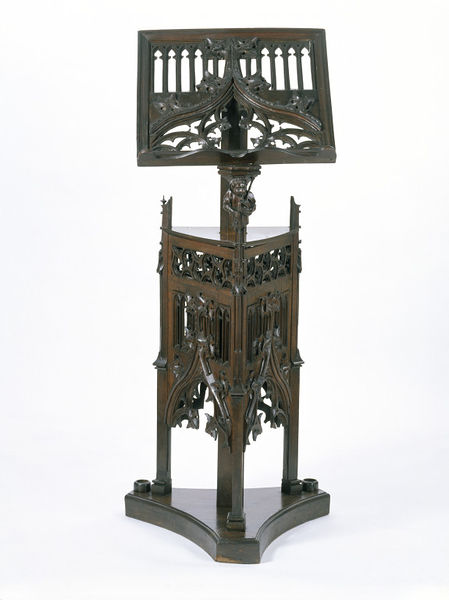 With the help of the lectern, the reader did not have to strain his arms holding up the book, which may have been quite heavy, and it also accommodated ‘hands-free’ reading. This was important for those conducting a church service or those delivering an important lecture in the classroom. Indeed, many medieval masters relied on hand-gestures to emphasize or articulate specific points of their argument. 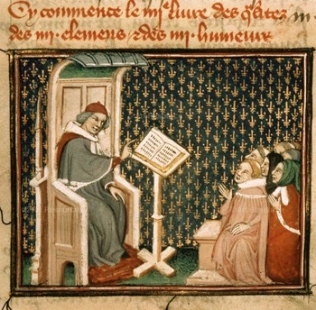 University master gesturing from a lectern

One of the most common lecterns used in the Middle Ages (and still in use today) is known as the gospel-lectern. As the name suggests, these particular stands were designed to hold open a gospel-book during the mass.

This painted wooden lectern is from the German Abbey of Alpirsbach (c. 1150-1175) and depicts the four evangelists holding up the book-platform on their shoulders:

Many of these gospel-lecterns take the form of an eagle — the symbolic animal form of the evangelist John. The eagle was believed to fly the highest (and thus the closest to heaven). In his preface to his commentary on Matthew, St Jerome explains that John is represented by the eagle because it is he who, ‘having taken up eagle’s wings and hastening toward higher matters, discusses the Word of God’.

The image below depicts such a lectern carved from marble by the Italian artist Giovanni Pisano (c. 1240-1319). If you look closely you can see that the eagle is clutching a small book in its talons: 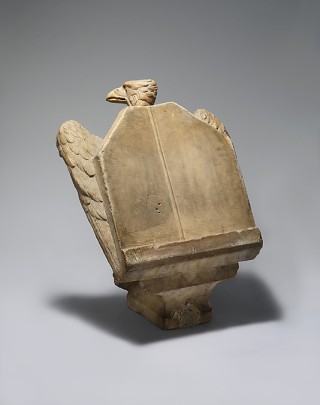 Gospel-books were not the only type of book placed on a lectern however. These stands were also used to hold large copies of the psalms or musical texts, such as missals, which would be performed by a choir. In manuscript illuminations, we often find images of singers crowding around a lectern while they sing:

Despite the fact that the book was presented on a large stand, realistically the group of singers would have had a difficult time reading the words and notes on the page. It is quite likely that most individuals would have memorized the material beforehand and the books would have been displayed on the lectern as part of the ceremonial tradition rather than serving an immediate practical purpose.

When books were not being used, they were often stored in large book-chests known as armaria (singular: armarium). This style of book-chest looks almost like a modern trunk turned on its side with the doors facing outwards. Shelves were often added to organize the books inside.

The earliest image of an armarium can be found on a marble sarcophagus from Rome (200 CE), which attests to the longevity of this system of book-storage!

Earliest portrayal of an armarium, c. 200 CE (Image source: From Cave Paintings to the Internet)

The most famous portrait of a medieval armarium can be found in the famous eighth-century bible known as the Codex Amiatinus. On fol. 5r, there is a miniature of Ezra writing next to a large wooden book-chest; the books are laid flat on the shelves: 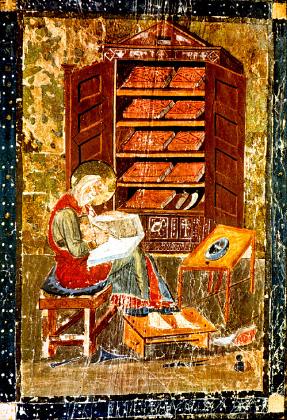 Armarium pictured in the Codex Amiatinus

Eventually the doors of the armarium would be removed and the modern-book shelf as we know it would be born.

In the post-medieval world, some rather creative early-modern engineers eventually designed an all-in-one system that featured a bookshelf (a miniature chained library included), a desk, a small lectern, and a cupboard. I could definitely use one of these in my office…