Scribal Abuse in the Middle Ages

Posted on January 31, 2014 by medievalfragments

Today’s blog is a guest post from Thijs Porck, a lecturer in the Department of English Language and Culture, Universiteit Leiden.

Adam scriveyn, if ever it thee bifalle
Boece or Troilus to wryten newe,
Under thy lokkes thou most have the scalle,
But after my making thou wryte trewe.
So ofte a daye I mot thy werk renewe,
Hit to correcte and eek to rubbe and scrape;
And al is through thy negligence and rape.

[Adam scribe, if it should ever happen to you that you write Boethius or Troilus anew, may you have scabs under your locks, unless you copy in true fashion in accord with my lines. So often in a day I must renew your work, and correct and rub and scrape it; and all is through your negligence and haste.]

In this famous little poem, Geoffrey Chaucer cursed the sloppiness of his scribe Adam. However, some evidence of the medieval punishments inflicted on other scribes in the Middle Ages suggests Adam got off lightly.

A number of inscriptions, added in the margins of English manuscripts, suggests that negligent scribes could face physical repercussions. In London, British Library, Harley 55, a twelfth-century miscellany containing medical texts and Anglo-Saxon law codes, an added note reads “Writ þus oððe bet ride aweg Ælfmær pattafox þu wilt swingan Ælfric cild”. Depending on whether we interpret the word “bet” as a form of Old English betan ‘to make amends, pay’ or bett ‘better’, this note translates as either ‘Write like this or pay (and) ride away, Ælfmær Pattafox will hit you Ælfric, child’ or ‘Write like this or better ride way, Ælfmær Pattafox will hit you Ælfric, child’.

Similar threats of violence against a scribe failing to reproduce the script of his exemplar are found in two twelfth-century notes, added in the margins of Oxford, Bodleian Library, Hatton 20 (a ninth-century copy of Alfred’s Old English translation of Gregory’s Pastoral Care). These notes are directed at scribe Willimot and read “willimot writ þus oððe bet” [Willimot, write like this or pay/better] and “writ þus oððe bet oððe þine hyde forlet” [write like this or pay/better or lose your skin]. Similar admonitions to ‘write like this’, albeit without explicit threats of physical punishment, can be found in other Anglo-Saxon manuscripts (Whitbread 1983).

The scribal notes in Harley 55 and Hatton 20 are painful reminders of the fact that a strict regime of physical discipline was an integral part of monastic education.  A twelfth-century manuscript now in Durham Cathedral Library shows a pupil being beaten by his teacher, next to the rubric “Afficitur plagis qui non vult discere gratis”  [He who does not want to learn freely must be taught with blows] (Cleaver 2009). 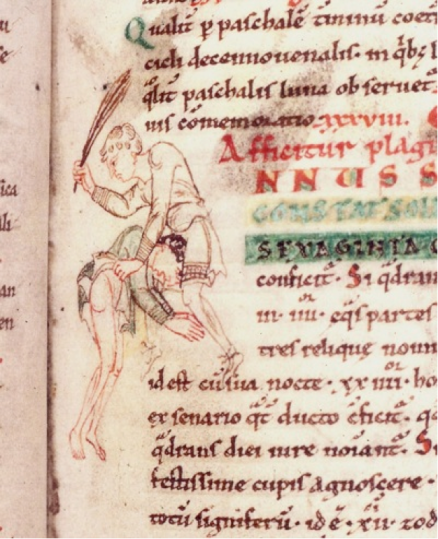 Monastic rules abound in corporal punishment for misbehaving monks and these sometimes included negligent scribes. The 9th-century typikon of the monastery of Stoudios in Constantinople, for example, lists the following punishments:

A diet of bread and water was the penalty set for the scribe who became so much interested in the subject matter of what he was copying that he neglected his task of copying. Monks had to keep their parchment leaves neat and clean, on penalty of 130 penances. If anyone should take without permission another’s quaternion (that is, the ruled and folded sheets of parchment), 50 penances were prescribed. If anyone should make more glue than he could use at one time and it should harden, he would have to do 50 penances. If a scribe broke his pen in a fit of temper (perhaps after having made some accidental blunder near the close of an otherwise perfectly copied sheet), he would have to do 30 penances (Wegner 2004, p. 210).

One particularly painful corporal punishment of a scribe, though not for erroneous copying, is found in the 9th-century Book of Pontiffs of the Church of Ravenna by Andreas Agnellus. After Ravenna rebelled against the Byzantine Empire at the end of the seventh century, one of its local rebels, the scribe Johannicis, is arrested and brought before Byzantine Emperor Justinian II, ‘the slit-nosed’ (669-711):

Justinian, having become enraged, ordered Johannicis to be brought into his presence; as if ignorant, he asked him ironically, “is this indeed Johannicis the scribe?” and when he answered that it was he, the imperial rage rose yet higher. He ordered a reed to be brought and he ordered that it be forced under all the nails of his fingers up to the second joint. He then ordered parchment and pen to be given, that [Johannicis] might write. When he received it, he forced the pen between two fingers. He did not write with ink, but with the blood which flowed from his fingers (Mauskopf Deliyannis 2004, pp. 265-6).

In true heroic fashion, Johannicis writes a prayer to God in his own blood on the parchment and throws this in the Emperor’s face. The enraged Justinian then orders Johannicis to die a ‘mouse’s death’; that is: he is crushed between two stones and dies.

In view of the above, Chaucer could have done a lot worse to Adam scriveyn than a mere conditional curse of scabs. So, the next time you are frustrated with barely legible scripts or missing pieces of text in medieval manuscripts and feel like wringing the scribe’s neck, rest assured that his contemporaries probably got there first…

Cleaver, L., ‘Grammar and Her Children: Learning to Read in the Art of the Twelfth Century’, Marginalia 9 (2009), http://www.marginalia.co.uk/journal/09education/cleaver.php
Mauskopf Deliyannis, D. (Trans.), The Book of Pontiffs of the Church of Ravenna (The Catholic University of America Press 2004)
Wegner, P.D., The Journey from Texts to Translations: The Origin and Development of the Bible (Grand Rapids, MI 2004).
Whitbread, L.G., ‘A Scribal Jotting from Medieval English’, Notes and Queries 228 (1983), pp. 198-199.