Where the Wild Things Are: The Medieval Bestiary

Posted on August 16, 2013 by medievalfragments

While a bit denser than Maurice Sendak’s modern bed-time story, medieval bestiaries were, and still are, crowd-pleasers. A bestiary is a collection of short descriptions about a wide variety of (real or imagined) animals, birds, and in some cases, even rocks. These entries were often accompanied by fantastic illustrations which no doubt entertained their intended audience nearly as much as they appeal to today’s tumblr fans.  Concerning the natural world, bestiaries were never intended to be scientific; instead the entries were moralizing and religious allegories. 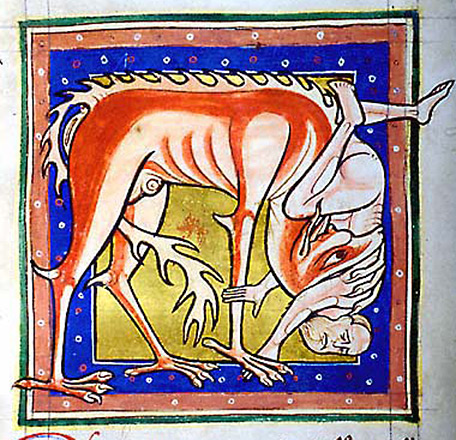 This bizarre crocodile will eat this man, then cry as it is wont to do. Morgan Library, MS M.81, Folio 70r.

The forerunner of the medieval  bestiary was the anonymous Greek Physiologus, written in Alexandria in the 2nd century CE. It drew from classical works by Aristotle, Pliny the Elder, Herodotus, and others, but introduced allegorical interpretations. Early Christian doctrine held that God created both the Word (or Book of Scripture) and the natural world (the Book of Nature) to instruct humanity. Each part of Creation therefore played a role in God’s revelation to humankind, according to interpretations of biblical verses such as Job 12:7-8:  “But ask the animals, and they will teach you;  the birds of the air, and they will tell you; ask the plants of the earth, and they will teach you; and the fish of the sea will declare to you.”

Works by Ambrose of Milan (4th c.),  Isidore of Seville (7th c.) and others were incorporated into bestiaries, increasing their Christian allegory and resulting in an ever-evolving genre. More animals were added to the original 50 of the Physiologus, many of which were clearly unfamiliar to the monks who compiled and illustrated these texts. Reaching their peak in the 12th and 13th centuries, over 150 bestiaries survive. Despite growth in hermeneutics, content, and popularity, the “factual” information generally stayed decidedly unscientific.  To the modern reader, some bestiary descriptions are almost ridiculously entertaining. One of my favourite common entries concerns the ape, which is usually accompanied by a miniature showing a mother ape fleeing a hunter .

The text accompanying the above miniature from the Aberdeen Bestiary explains:

… A characteristic of the ape is that when a mother bears twins, she loves one and despises the other. If it ever happens that she is pursued by hunters, she carries the one she loves before her in her arms and the one she detests on her shoulders. But when she is tired of going upright, she deliberately drops the one she loves and reluctantly carries the one she hates. The ape does not have a tail. The Devil has the form of an ape, with a head but no tail. Although every part of the ape is foul, its rear parts are disgusting and horrid enough. The Devil began as an angel in heaven. But inside he was a hypocrite and a deceiver, and he lost his tail, because he will perish totally at the end, just as the apostle says: ‘The Lord shall consume him with the spirit of his mouth…” (II Thessalonians, 2:8)

Another interesting and common story, as depicted below in the Harley Bestiary, is that of the beaver. According to most bestiaries, the beaver was primarily hunted for its testicles which were thought to have medicinal properties. If cornered by a hunter, the beaver will gnaw off its own testicles and toss them to the hunter to end the chase. If pursued again, the beaver displays his lacking parts to secure his escape. A grisly scene, sure, but this provided a useful ascetic lesson: if a man wanted to live a chaste life, he must sever his vices and throw them in the devil’s face. Seeing that the man has no vices left by which the devil may control him, the devil will let him be.

While we might find some of the bestiary entries so obviously preposterous, it matters little whether or not medieval readers believed the accounts. Scientific edification was not the point; spiritual enlightenment was the goal. So, whose spiritual development was targeted?

Generally, bestiaries were engagingly illustrated, entertainingly written, and intellectually accessible, which likely contributed greatly to their popularity and the diversity of their audience. Most surviving medieval bestiaries are written in Latin, and were made and used within monasteries (indeed like most manuscripts). Additionally, from the early 13th century onward, vernacular language (especially French) bestiaries were introduced, making the genre more accessible to a non-monastic audience. Many have argued that these were used as didactic tools during sermons and instruction of lay people, while new versions such as Richard de Fournival’s Bestiaire d’amour (c. 1290) were read more for entertainment. Willene Clark successfully reasoned that Hugh de Fouilloy’s De avibus (c. 1160), which was often incorporated into bestiaries, was intended to instruct lay-brothers. An excellent example of this Aviary comes from the scriptorium of Ter Duinen (the focus of my dissertation) c. 1190-1200. It’s likely that it was indeed somehow employed in teaching Ter Duinen’s numerous lay-brotherhood.

The popularity of bestiaries in the Middle Ages is unsurprising to me. It’s also easy to see why they have become so popular today; from digital facsimiles and online scholarly projects to tumblr pages and facebook feeds, medieval animals practically leap from their manuscripts to our computer screens.