Posted on May 3, 2013 by medievalfragments

On my Tumblr I recently posted two entries devoted to a remarkable discovery made in the Book History class I am co-teaching with Paul Hoftijzer for the Book and Digital Media Studies programme at Leiden University. It concerns 132 notes, letters and receipts from an unidentified court in the Rhine region, jotted on little slips of paper. They were hidden inside the binding of a book printed in 1577, which is part of the Bibliotheca Thysiana, a seventeenth-century library in Leiden, established by Johannes Thysius (d. 1653). The gems were discovered by during our class while students were systematically going through the binding remains in the library. The tiny slips made headlines in Dutch and Belgian printed media and featured in a popular news show on Dutch national radio. Why are they so special?

The hidden archive and the bookbinding it came from

The slips are first of all remarkable simply because such small written objects rarely survive from medieval society. Due to their limited dimensions they tend to fall in between the proverbial cracks of the transmission process. There are few places where such objects can slumber undisturbed for centuries. Their low survival rate is also connected, however, to the fact that they were meant to be thrown out after use. In fact, this is what actually happened, although through the process an early-modern bookbinder unintentionally saved them. When a printed book from 1577 was to be fitted with its binding, the binder grabbed the 132 paper slips from his equivalent of a blue recycling bin and moulded them, likely wet, into cardboard boards. This is when their long journey to our modern period started, as stowaways hitchhiking on sixteenth-century printed matter. Thysius bought the volume second-hand and had likely no idea of the hidden treasures it contained. 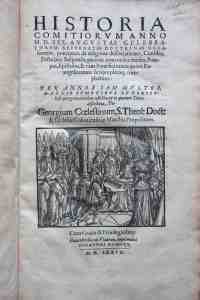 Title page of the book that contained the archive

The collection also stands out because of its sheer size. As I briefly explained in an earlier blog, recycling medieval written material was a frequent occurrence in the workshop of early-modern (as well as medieval) binders. However, the very high volume of leaves the binder used is exceptional. What is so striking about the paper slips is that they tell us everyday things that we normally rarely hear about in historical sources. Take the note from 4 December 1461 sent to a chamberlain by a steward, asking “Could you please send me 6 guilders, because we need it?” It concerns internal mail from within the unknown household, likely delivered by a servant: the back reveals a fold and the designation “chamberlain”. We can almost hear him dash through the house, note in hand. A number of slips are receipts from payments: for work done by a carpenter, for the purchase of wheat for the horses of guests, and alike. Messages like these bring us as close to real medieval society as you can get. They are the medieval voices we normally don’t hear, that tell the story of what happened “on the ground”.

Note from steward to chamberlain (front)

Note from steward to chamberlain (back)

My favorite slip is a tiny note written by (or on behalf of) Count Philip (d. 1508), who held court near the river Rhine. On 31 May 1486 he sent his servant to Heidelberg with a most charming request. “Could you please get me some wild roses?”, he writes, adding “But make sure to also include some that are not yet flowering.” It is a small miracle that we still have this 527-year-old paper slip, which is the equivalent of our yellow sticky note. (How many post-it notes do you keep after use?) Judging from the back, where we encounter part of a seal and an address, the note was cut from a letter. In other words, the paper used for this request was recycled twice: once in 1486, when the note was written; and once in 1577, when it was made into a board for a bookbinding.

Note from 1486 requesting for wild roses

That such a twice-recycled object still exists and that it provides such detailed information about real people asking for real things, turns the archive into both a valuable medieval source and an exciting object to work with. Holding the request for wild roses in your hand really makes you think about how the flowers will have been used, who looked at them, and what conversations were held in the room where they were placed. Students will continue to hunt for fragments in Bibliotheca Thysiana and one of them will write his MA thesis on the hidden archive. The voices it contains will hopefully be allowed to speak more and louder.