Posted on March 8, 2013 by medievalfragments

Luckily for me, one of my ‘bucket list’ manuscripts is the Leiden Aratea (Leiden, Universiteitsbibliotheek, VLQ 79). Even better: last month I stood alongside a famous scholar while he thumbed through it. Best of all: the Museum De Lakenhal in Leiden is displaying the Aratea from 9 March to 30 June. Now you too can see it!

(Can’t make it to Leiden? Check out the University’s excellent digital facsimile on their website.) 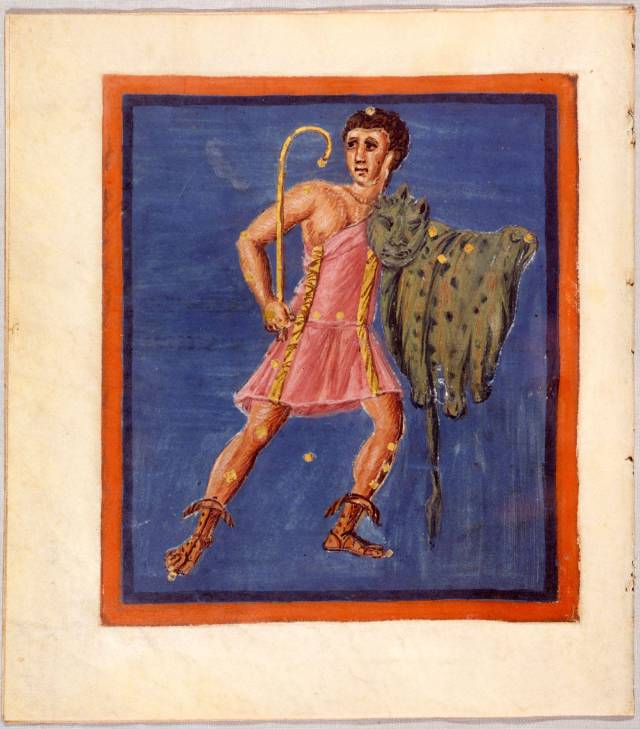 Unlike the famous manuscripts of his father Charlemagne’s reign, the surviving masterpieces of Louis the Pious’ reign (814-840) don’t come from a ‘Court School’, but rather hail from Reims. Shortly after Louis ascended the throne his childhood friend Ebbo became Archbishop of Reims, as well as a great patron of fine books. While several of the most magnificent luxury manuscripts from this period are attributed to the Reims School (ex: the Ebbo Gospels, Utrecht Psalter and Bern Physiologus), the Aratea’s precise origins and owners are uncertain. It was probably made in the Lorraine region (perhaps at Aachen) between 816 and 840. It was likely owned by Louis, his wife Judith, or his son Lothair. Despite fuzzy origins, it certainly holds its own against its celebrity peers, and truly offers something interesting for everyone.

For the classicist: The text is an astronomical treatise by Germanicus Julius Caesar (15 BCE –19 CE), a prominent Roman general and father of Caligula. His work is a Latin translation of the Greek Phaenomina of Aratus (c. 315-240 BCE), which was in turn based on two prose works by 4th-century BCE astronomer Eudoxus of Cnidus. Aratus’ work was an extensive didactic poem describing the constellations and astrological phenomena for the Macedonian court. The text was intended, through each era of reproduction, more for entertainment than educational use; it’s not a particularly accurate account of the night sky.

Not only is the Leiden Aratea the earliest (and most stunning) of the surviving texts, but it’s also noteworthy with respect to classical text transmission. Interdisciplinary studies have suggested that it is likely a copy of a late antique exemplar, speaking to both the survival and the 9th-century resurrection of Roman literature. This version moreover contains some snippets of Avienus’ 4th-century translation of Aratus, and was probably the model for two 10th-century copies from St Bertin (Boulogne, Bibliothèque Municipale, Ms 188 and Bern, Burgerbibliothek, Ms 88).

For the art historian: The Leiden Aratea’s 38 extant full-page miniatures are not only spectacularly beautiful, they’re also the source of much discussion. Many scholars have argued that they are direct copies of a probably 4th-century work: subject matter, format, technique, and style all point to a faithful reproduction of a lost late-antique exemplar. Further, the impressionistic and painterly quality of the miniatures do not quite reflect the known trademarks of established scriptoria at the time. Neither are there colophons, notes, or palaeographical features that help identify its origins. Also noteworthy: many miniatures contain (now badly trimmed) instructions to the artist describing which image should be added to the page (the outer margin of folio 3v reads “[arctur]us maior et [mino]r cum serpente”). 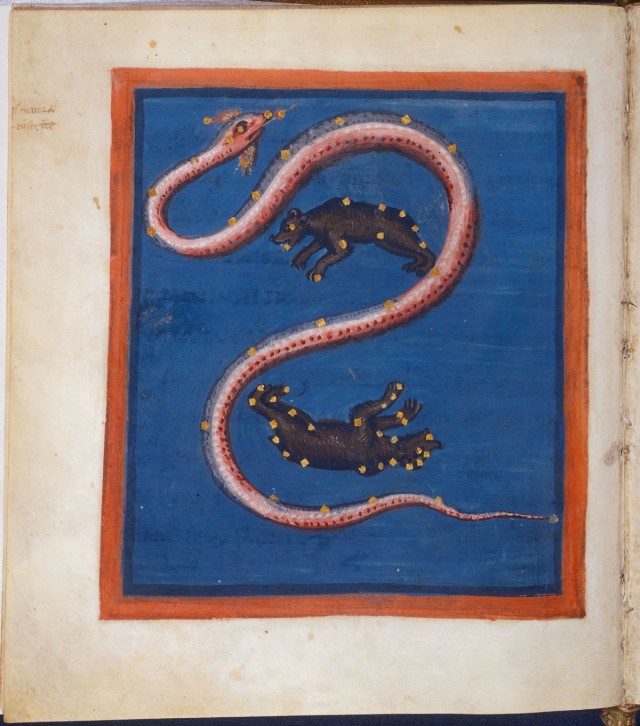 For the codicologist: The dimensions of the Aratea are listed often: 225 x 220mm. They still caught me off-guard in person. While the above-mentioned miniature instructions confirm some trimming, the book would have always been rather square, and really quite small. It would have indeed been easily handled by the reader for close examination of its images. Today’s reader can find another interesting aspect: careful inspection of the blank sides of the miniatures show faint outlines of the figures, indicating that they were not simply copied by later artists, but traced right from the source. 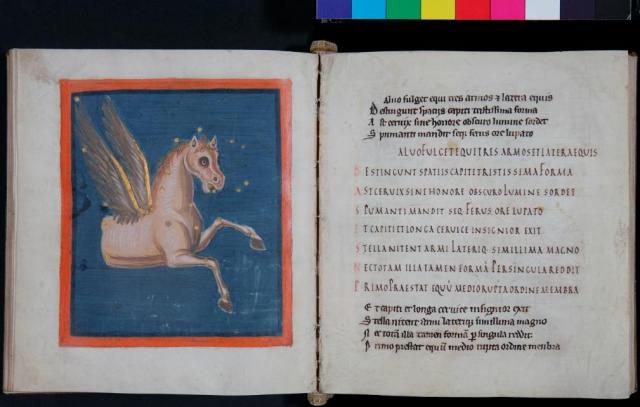 For the palaeographer: The main text is written in narrow rustic capitals, a script intended to reflect the antiquity of the exemplar and only reserved for the finest books. In fact, due to the intentionally anachronistic hand, later humanists thought that the Leiden Aratea (along with the Utrecht Psalter) was much more ancient than the 9th century. Although the majuscule is perfectly legible to our modern eye, it was apparently not perceived as adequate to the later medieval reader; a rather inelegant and much less decipherable Gothic hand repeats the main text throughout to make it accessible to a contemporary audience.

For anyone: You don’t have to be a specialist to enjoy the Leiden Aratea. This little book has so much to recommend it. Anyone who has gazed up at the constellations on a clear night, knows their zodiac sign, or simply likes a good picture book can appreciate a glimpse of this treasure. 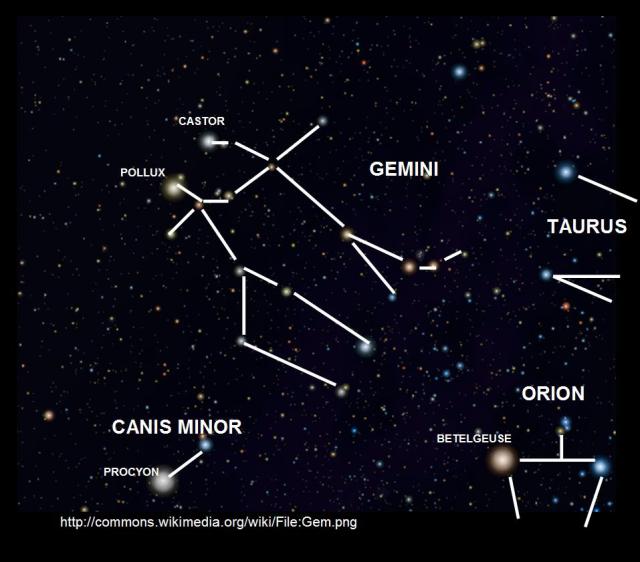 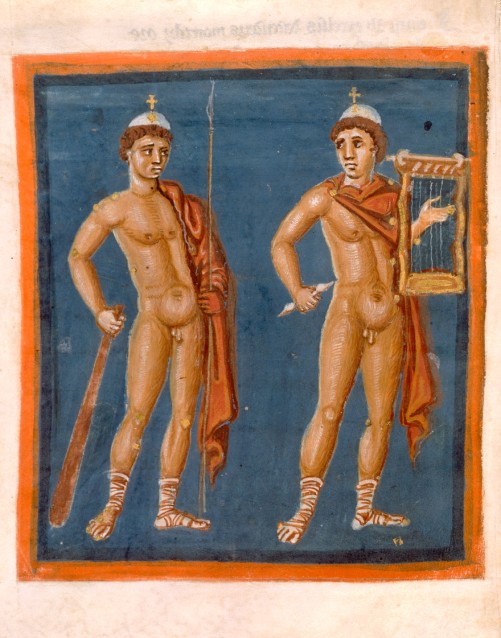 If I haven’t completely sold you on visiting the Aratea, the exhibition also features the 12th-century King Louis Psalter – truly nothing to sneeze at! – as well as numerous modern treasures from Leiden University’s Special Collections. Check out the exhibition info here.

The Leiden Psalter of St Louis, displayed at our February 2013 Lieftinck Lecture. Photo by Julie Somers.