Web 2.0 and the Promotion of Medieval Manuscript Studies

Giulio is an intern on the ‘Turning Over a New Leaf’ project, and a current student on the Book and Digital Media Studies MA program at the University of Leiden

Some weeks ago I decided to write my last paper for my Masters program on “Medieval Manuscripts and Social Media”, investigating whether the use of Web 2.0 could help raise interest in the subject.

Result for keyword “Manuscripts” on Google Insights for Search 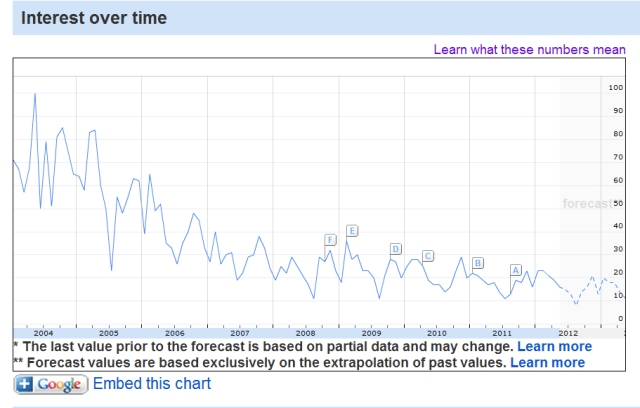 Result for keywords “Medieval Manuscripts” on Google Insights for Search

I was disappointed:  “Why?! Manuscripts are beautiful! Everyone should love manuscripts!” was the most common thought in my mind while I was contemplating the results. Then I realized something: until nine months ago I knew nothing about manuscripts. Or better: I knew they existed, I knew they were written “somewhere, sometime, somehow, and for some reason”, but I had no idea of the different scripts, the different type of parchment, etc. It wasn’t until I met good lecturers that were capable of transmitting to me passion and interest in the subject that I started to become addicted to parchment and ink.

“How can we invert the trend shown by Google Insights?” was the question that came to my mind. “How can we spark some interest in such a specific subject in people?”

A lot of times, people don’t know what they want until you show it to them. This is what Steve Jobs stated in 1998 during an interview with the magazine BusinessWeek. If we accept Jobs’ statement as true, then we have to show people manuscripts.

But, how? Clearly, walking around knocking at doors showing a twelfth-century Gothic manuscript rambling on about how “cool” it looks won’t work (besides, curators of special collections would faint at the idea of a manuscript leaving the safe walls of the library!).

It’s the age of the internet: Facebook has half a billion users; YouTube is visited by millions of people daily. Why not attempt to speak the visual and audiovisual language of the web, rather than that of 300-page long books?  The objective should not only be the creation of an army of new scholars that thrives on Caroline or Gothic script.  It should be one of raising awareness about beautiful artifacts that preserved culture during the Middle Ages, among the greater public.

I’d like to take, for example, the Lux in Arcana exhibition in Rome: the video on YouTube alone collected a total of 290,550 views since the 23rd of November 2011; a Twitter account, a Facebook Page and an official website helped in reaching an even wider audience than those physically able to visit the exhibition. Without these the exhibition would not be as successful as it is today. Web 2.0 was used and a spark of interest in manuscripts was generated. Wonderful! But there are issues with such an approach: setting up a website and all the social media pages, then keeping good care of them, takes time, some expertise and money. Three elements that are not always readily available. However it would be an investment that would, eventually, make returns in terms of audience and interest.