Animals and their Books

Posted on April 20, 2012 by medievalfragments

As I was perusing through some images of my current corpus of Norman manuscripts this week, I came across an old folder titled “animals and their books.” When I first began my doctoral research, I made a collection of folders to store anything I found interesting, regardless of their relevance to my current research, just in case they might be useful later. This particular folder contained all kinds of manuscript images depicting animals carrying, holding, reading, or dictating books.

In many of the examples, I found animals such as the lion, the eagle, or the ox —figures commonly used by medieval artists to symbolize the Evangelists. The following example demonstrates a winged ox protectively clutching the Gospel of Luke: 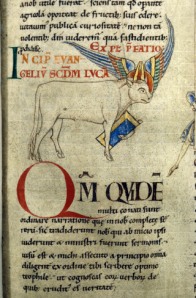 In a manuscript from the Norman abbey of Jumièges (Rouen BM 312) I found a similar image of an ox peeking his head into the frame of an illuminated initial and whispering into the ear of a scribe as he writes:

At first this scene appears to be fairly typical: the animal, representing the Evangelist Luke, dictates the words of his Gospel to the scribe—until I realized that the scribe was actually writing the Gospel of Mark, typically symbolized by a lion (or in some cases a man). The manuscript itself comes from the Norman abbey of Jumièges and, just as the scribe’s words suggest, it contains the Gospel of Mark. So what is happening in this little illuminated initial? Why is Luke (symbolized by the ox) dictating the Gospel of Mark? Should that not be a lion in the corner?

While some early medieval theologians did assign the symbols to the Evangelists differently, three prominent and widely read Latin Church Fathers— Augustine,  Jerome, and Gregory—all agree that the symbol for Luke is the ox. After a brief foray into the world of medieval symbols,  I came across an early Christian author by the name of Pseudo-Athanasius, who appears to be one of the only authors to portray Mark as the ox. Pseudo-Athanasius is a particularly shadowy figure and difficult to track down; many of his works are known only by the fact that they were wrongly attributed to the Greek Church Father Athanasius of Alexandria (d. 373). He also does not appear to have been widely read by Norman monks in the twelfth century as none of his works appear in the surviving book lists of the abbeys of Bec, Fécamp, or St-Évroul.

So why did this illuminator choose to depict Mark as the ox? Was he more familiar with the work of Pseudo-Athanasius than he was with the writings of Augustine, Jerome, or Gregory? Was it a simple mistake—the illuminator putting horns on his beast instead of a lion’s mane? While the study of religious symbols is well beyond my field of expertise, this mini-research adventure has encouraged me to pay closer attention to the illuminations in the manuscripts of my corpus. Although my “animals and their books” folder was originally designed as a humorous side-project, perhaps it deserves a little bit more attention in the future.

This entry was posted in Jenny Weston. Bookmark the permalink.